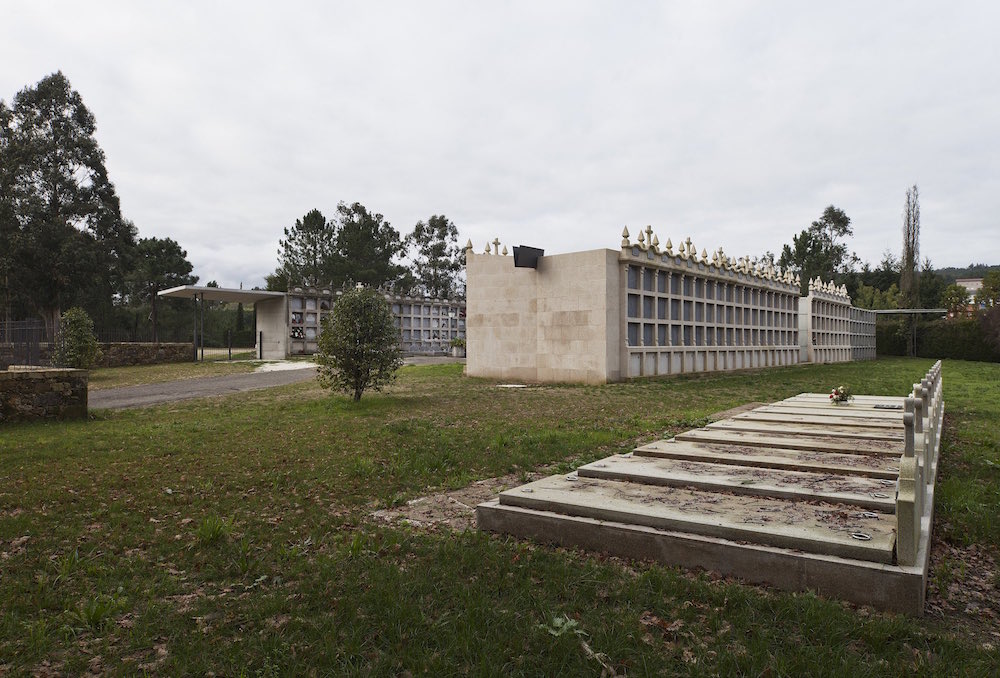 LOCATION
The cemetery extension project is being carried out on a plot of land located on an Undelimited Development Land (SUND-9) in Santa Cruz de Ribadulla, in the municipality of Vedra.

The SUND-9 in which the project is located is the result of the specific modification of the Vedra General Municipal Development Plan that transforms the Delimited Development Land No. 7 located in Santa Cruz de Ribadulla into Undelimited Development Land which, according to the numbering of the PXOM, becomes SUND-9. The reason for this specific modification is based on the need to enlarge the existing cemetery (currently full) as well as on the construction of the future church of this parish. This function is currently carried out by a chapel located inside the privately owned Pazo de Ortigueira.

The main purpose of the modification is due to the difficulties observed in the process of developing the Partial Plan, as there is no immediate interest in its development on the part of the main owners of the area. After the first quadrennium of the Vedra General Development Plan, within the time frame of which the development of this area was foreseen, the local administration was faced with the need to adopt measures that would allow the partial execution of the objectives foreseen in the Partial Plan.

The proposed development, (which in some way assumes what is already established in the Partial Plan of the original document), will be determined by a future Sectorization Plan based on the requirements of Law 9/2002 of Urban Planning and protection of the rural environment of Galicia.

We are therefore talking about a plot of 8,527 m², occupied by underground burials and a built area of 216.6 m². The current cemetery has 80 pantheons of 4 floors each distributed in three rows of 35,13 and 32 pantheons. It also has 116 ground tombs and a general ossuary that will serve the planned expansion.

The longitudinal axis of the plot and the cemetery coincide approximately with the north-south axis. The topography is noticeably flat at the top where the cemetery is located, descending slightly towards the southern end of the plot. Attached to the plot itself is a small forest with native species that will be a fundamental part of the proposal. The proposal proposes a continuity with this adjacent green space.

The access and urban services to the cemetery are resolved through the public road that gives access to the pre-existing cemetery. This same road also provides access to the car park and will be used to access the parish church in the future.

PROJECT
An extension of the pre-existing cemetery is planned with 42 new cemeteries, 70 columbarium units and 10 tombs with a built area of 190.4 m² of new burials. In addition, the construction of a new building in the northern part of the plot is planned, containing the auxiliary uses of the cemetery required by the Mortuary Sanitary Police Law. The 63 m² constructed area includes a mortuary, 2 adapted bathrooms, a waste incinerator, a general store and an external container store.

STRATEGIES
We are faced with the problem of having to enlarge a closed cemetery. U-shaped burial blocks, with a stone wall closing the open side and marking the access and separation of the enclosure. We are received by a green container of organic waste where to deposit the dried flowers. The U is open to the south, with a small auxiliary building on the right acting as a warehouse. Once inside, everything’s packed. There’s no more room. It was decided to open the cemetery and rebuild the closing wall in a new position to oxygenate the whole. The previous auxiliary building that will have to be rebuilt to the north is demolished, according to new laws and needs.

The pre-existence of the current cemetery marks the urban, aesthetic and environmental conditions of the project. All the proposed buildings are ground floor buildings and in no case exceed the height of the pre-existing cemetery. The intervention is understood as the unification of the back of some not always fortunate pantheons, freeing the outer perimeter and allowing the appearance of vegetation and views over the environment thanks to a privileged topographical situation on top of a hill. The cemetery is understood as a green space that connects with the forest located on a plot of land annexed to the project. The intervention involves the placement of the general services of the cemetery in the northern part and the extension of the cemeteries at the back of the central burial block. The work is completed with a series of soil burials in the area at the entrance to the extension. The aim is to finish off the pre-existing elements, either with more burial elements, with the auxiliary building or simply with an access to the cemetery.

There are three different accesses to the cemetery that provide direct access from the car park, from the future church and a more private access to the north that allows the entrance of a hearse to the mortuary.

The extension consists of 42 pantheons of four high niches, 70 columbarium units and 10 ground tombs. From a typological point of view, it was decided to take as a burial model the one already existing in the old cemetery, unifying the façades of the whole complex. We try to avoid social differentiation, the idea of a new cemetery as opposed to an old cemetery so present in our Galician reality. To give the importance it deserves to what has already been built. They’re all the same. In this line of thought, the columbarium units are also arranged as a hole in the row of new pantheons, dividing the continuous strip and subdividing the whole into smaller units, more in keeping with the constructions of rural areas. And also more in keeping with the pre-existing cemetery in which the presence of small chapels can be observed. Requests from the neighbours themselves are also taken on board, such as the installation of a crossbeam or the relocation of the pre-existing cemetery door at the entrance after the auxiliary building. In this way, the project proposes a hybrid situation in which the more classical burial elements coexist with elements of more contemporary language, such as the lateral entrance to the cemetery from the future church, the rainwater collection gargoyle or the auxiliary building itself.

The irregular shape of the roof of this auxiliary building is marked by the minimum setback imposed from the PXOM of Vedra which in this case is 5 metres from the closing of the plot. This building is designed with large covered porches in order to shelter people in case of rain. It is a piece that absorbs the complementary needs of a cemetery and takes on the always difficult task of keeping the waste containers hidden from view. It is designed open through a hole located in the upper part of the enclosure. Given the pattern of discontinuous use of this space, the openings will be kept open and protected by a lattice of wooden bars in order to achieve intimacy, lighting, continuous ventilation and also try to prevent the passage of birds and animals inside the spaces.

The urbanization of the cemetery is resolved by planting grass, native trees and plant species that will colonize the enclosure wall. As always when working with nature, the final photos of the work should be repeated in 20 years when the proposed vegetation grows and climbs through the stone walls and the gates and metal fences designed for this purpose. A dark tonality of all the metallic elements of the project is proposed as a complement to the dominant green colour and in a clear allusion to the funerary character of the project. 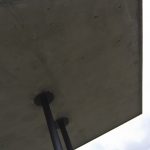 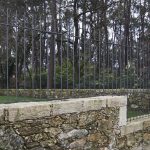 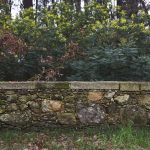 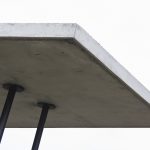 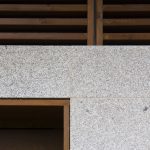 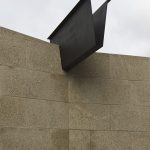 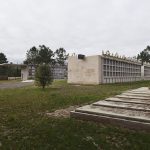 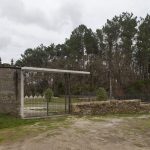 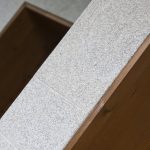 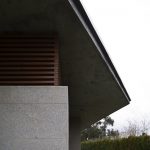 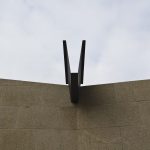 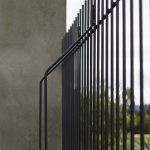 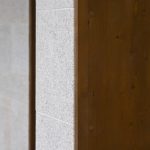 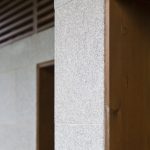 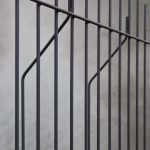 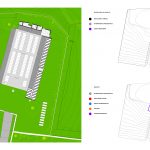 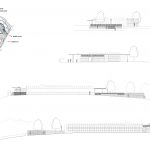 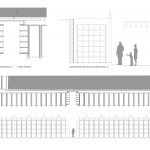 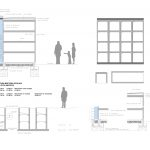 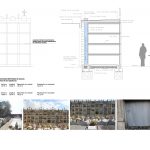 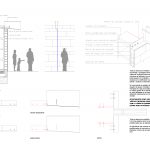 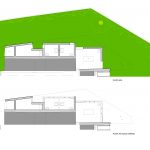 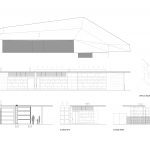 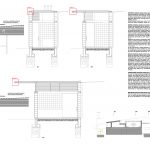 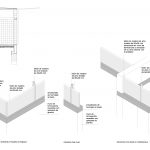 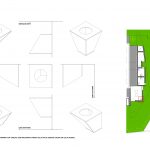