RedEIRA is a study on the possibilities of obtaining a large scale shaded environment for public spaces, using textile systems with minimum visual impact and economy of means.
The name implies a new meaning to the term referring not only to the profession but also to the place using the etymological root of the term -eira.

Who are we?
The project is carried out through a network of an interdisciplinary team of engineers, architects, designers and craftspeople.
The idea is to take advantage of this by designing a textile material for the generation of large shaded spaces. The materialization aims to take advantage of the experiences of the team members in similar structures to generate an original project with a social and historical character on a very sensitive area of the city.

Where?
The Baluarte del Parrote in Coruña, a privileged area for the views and the sunshine but lacking in shade at present, is the area of application. Its location on the area where the old walls used to be used as a heritage site allows for a contained foundation with no major impact on the pre-existing structures.

Civic participation
The need for shaded areas that generate pleasant public spaces for people to spend their time in is a requirement that citizens expose through citizen participation policies. We propose this work as a practical research, urban prototype that serves as a first experience to apply in other parts of the city and that can be exposed to the judgment of neighbors through implementation, being the system generalizable if satisfactory.

Location
The Baluarte is currently an area of around 1600 m2, elevated from the rest of the promenade. Historically an area linked to the arrangement of boats and nets, traditional image of the fishing A Coruña. The accompanying photos show the Parrote netters in the 1940s. Today the platform is an exceptional area to enjoy a public area with great urban potential because it is a place where the prevailing winds are contained and where there is sunshine from east to west without the shadows of adjacent buildings.
The proposed layout generates shaded areas of 70 % of the current surface area with a minimum of floor supports (three masts) and six floor braces plus two tie rods to the rear walls, all of which are joined by a structure of benches that could be folded up and retracted to the floor to allow the entire surface of the square to be used without obstacles in the case of public shows, a flexible space that allows for different uses.

Structure
The Baluarte is accessible via a side slope and connects via the staircase to the Paseo del Parrote on a higher level. It is therefore a strategic point of pedestrian connection between urban areas, which is currently very little used. Its configuration allows to reinforce this character of articulator of movements and living area.

Views
The layout of the elements aims to combine aesthetic and structural criteria allowing panoramic views from all levels, the port, the Baluarte itself, the Parrote and of course the homes.
The structure has a shaded area of about 800 m2 (depending on the time of year and the time of year) and is complemented by a series of benches that complete the work..

Project Antucas
The Antucas project is a creation of the design studio Juán Ares (www.juanares.es) consisting of a series of shading tapestries made with reused fishing nets. This type of material in collaboration with the craftswoman Idoia Cuesta generates a great variety of shade effects by virtue of the work on the material.
We consider this experience fully adaptable to scale up and produce the large canvases of the project.
The product has already been presented in the series #proxectosacontracorrente at the Luis Seoane Foundation and the first prototypes are currently being produced and can be seen in the images.
The project was also enriched with the participation within the project Enredadas in collaboration with the Fundación Artesanía de Galicia to involve different cooperatives of redeiras in the production of the product, participation that could be included in the present project trying to increase the degree of commitment with the local communities linked to traditional trades and to the promotion of the deseasonalization of the work of these groups. 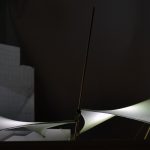 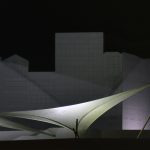 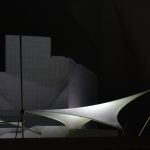 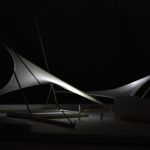 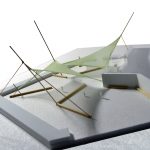 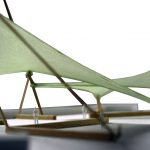 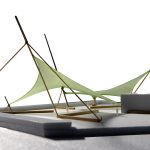 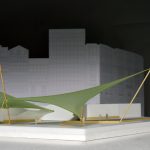 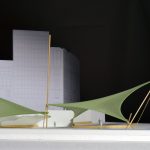